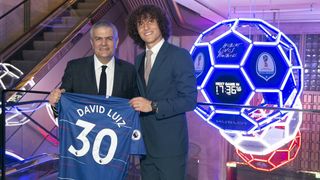 Mohamed Salah has a good chance of winning the Ballon d'Or if he helps Liverpool triumph in the Champions League final, according to Chelsea defender David Luiz.

The Egypt international has scored 44 goals in a memorable first season under Jurgen Klopp and has been tipped to challenge Lionel Messi and Cristiano Ronaldo's 10-year dominance of the game's top individual award.

Luiz sees no reason why Salah cannot stake a claim for the prize if he can get his hands on the Champions League trophy - Liverpool meet Real Madrid in Kiev on Saturday - and produce the goods at the World Cup next month.

When asked if he sees his old team-mate as a Ballon d'Or winner, he told Omnisport: "I don't know, it depends on the year, depends on things.

Salah struggled to make an impact during his time at Chelsea and was sold to Roma in 2016 after successful loan spells with the Giallorossi and Fiorentina in Serie A.

It was there that the 25-year-old began to develop into a top-class forward, prompting Liverpool to sign him last year for a fee that could rise to €50million, a club record before deals were struck for Virgil van Dijk and Naby Keita.

Luiz thinks highly of Salah as a professional and is confident his best years are yet to come.

Luiz, a Champions League winner in 2012, is expecting an "amazing" final when Liverpool take on Madrid.

"It was one of my highest moments in football," he recalled. "It was great, especially in the condition I was playing in that final. I was injured for three or four weeks, thinking I was not going to play, then arrived the moment and we won.

"It was hard to play against Bayern in Munich and then I had the pleasure to touch the trophy and be a winner of the Champions League, it was great.

"[Roberto] Firmino is my great friend, also Salah and [Sadio] Mane, they are doing amazing. It's going to be an amazing Champions League final, both teams deserve to be there and I just want to sit on the sofa and watch this game."

David Luiz was speaking at the unveiling of the Hublot Champions' Advice campaign. Hublot are the Official Timekeeper of the FIFA World Cup 2018.