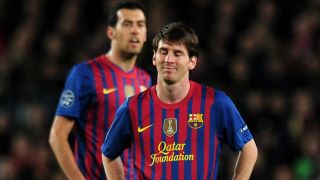 Messi missed a penalty as the Catalans surrendered a 2-0 lead to draw 2-2 with the Premier League side - who were playing with 10 men after John Terry's sending off - which saw them lose the tie 3-2 on aggregate.

Sanchez, who started that game for Barca, has revealed how hurt his former team-mate was in the wake of the defeat and feels it shows the demands players place on themselves at the highest level of the game.

The Manchester United forward, who earns a reported £350,000-a-week at Old Trafford, also believes players can be unfairly criticised based on the money they earn.

"I think football saves many people," Sanchez told Sky Sports. "It can give you a life of luxury, but people don't see all the effort that goes in behind the scenes.

"That might mean not seeing your family, or missing your mother's birthday, many players are so focused that they miss the birth of their children.

"You might cry during a game if you lose a final. That's all part of football. In the Barcelona dressing room after the Chelsea game, I saw Leo cry. That's because players demand so much from themselves. People don't see that.

"Sometimes people say things such as, 'He's got too big for his boots' or say, 'He's changed'. You buy a flash car and people say that you're a show-off.

"I've learnt so much over time and with the experience that I've gained. You can't please everyone. There'll always be one or two who get angry. I've learnt so much from playing football: I love football and that's what I do. I enjoy myself and I'm just trying to be happy."

Sanchez's side take on Newcastle United at St James' Park in the Premier League on Sunday.