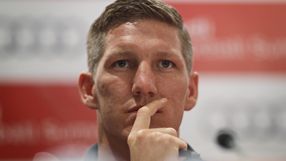 Defenders Jerome Boateng, Philipp Lahm and Holger Badstuber, midfielders David Alaba, Luiz Gustavo and Toni Kroos and forward Thomas Muller are all a booking away from a one-game suspension, which would rule them out of next month's title match at their own Allianz Arena should they progress.

The Bundesliga side, four-times continental champions, have a 2-1 advantage over Jose Mourinho's nine-times winners from the first leg and Schweinsteiger predicted the early stages of the return game at the Bernabeu will be crucial.

"The first 20 minutes are sure to be intense and we have to hold firm and avoid conceding," the Germany international told a news conference on Tuesday.

"All of us will be putting everything into challenges, we just have to avoid picking up silly yellow cards," he added.

Schweinsteiger played in the team that lost the 2010 final at the Bernabeu to Mourinho's Inter Milan and he agreed with the Portuguese's remark that given Real's firepower Bayern would probably need to score at least once to get through.

Real have won 10 of their last 11 Champions League home games and have amassed 22 goals in five games at the Bernabeu in this year's competition.

Forward Cristiano Ronaldo has been in scintillating form, supported by strikers Karim Benzema and Gonzalo Higuain and creative forces Angel di Maria and Mesut Ozil, who plays for Germany alongside many of the Bayern players.

"I expect that we will have to score a goal - and we will," said Schweinsteiger, who has only recently returned from an injury layoff.

"A game like this is a highlight of the season," added the 27-year-old.

"You work towards it the whole season and it was something that also motivated me while I was out of action."

Bayern coach Jupp Heynckes, who led Real to the Champions League title in 1998, said it was not set in stone that Real's 2-1 La Liga win at Spanish and European champions Barcelona on Saturday, which virtually wrapped up the title, would help them.

"Normally you would say that when a team like Madrid wins 2-1 at the Nou Camp and almost clinches the title it's an advantage," Heynckes, who also had stints at La Liga clubs Athletic Bilbao and Tenerife, said on Bayern's website on Tuesday.

"However, you never know for sure," he added. "I follow the Spanish press and you can tell that people in Madrid have a great deal of respect for us.

"It's clear that we are going to have to score one or two goals. We are quite capable of that as we have dangerous forwards but first we must range ourselves in a compact and narrow way and that will create chances to counter attack."