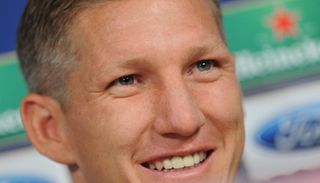 The 20-year-old Gotze, who will join Bayern at the end of the season in a surprise deal worth a reported 37 million euros, has been nursing a muscle injury that has ruled him out of the biggest game of his career so far.

"When players like Gotze drop out, maybe the team gets a little weaker," Schweinsteiger told reporters a day before the team's departure for London. "It would have been the biggest game of his career so I sympathise with him.

"However Dortmund will put out 11 players who will give 100 percent for the cause," said Schweinsteiger, hoping that four-times European champions Bayern win the trophy after twice falling at the last hurdle in the past three years.

The absence of Gotze may hurt Dortmund but many of their fans had questioned whether the Germany international would be able to deal with playing against his future team on such a big occasion.

"We respect Borussia Dortmund but I believe it's down to us if we win or lose," added Schweinsteiger. "If we reach our potential then there are only a few teams in Europe who can beat us."

Bayern are chasing an unprecedented treble of titles for a German club after winning the Bundesliga in record fashion. They also take on VfB Stuttgart in the German Cup final on June 1.