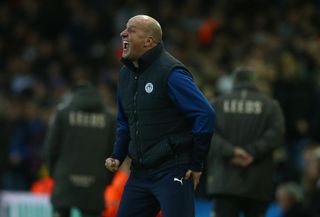 Dunkley, an 88th-minute substitute, had not been on the pitch long when he sustained a suspected broken leg in a goalmouth scramble.

He received lengthy treatment on the pitch before being carried off on a stretcher and taken to hospital.

Wigan boosted their fight against relegation with a well-deserved win through goals from Kieffer Moore, Jamal Lowe and Michael Jacobs.

They still lie outside the safety zone but now only on goal difference from 21st-placed Middlesbrough.

“I’m not going to be speaking for very long,” Cook said. “It doesn’t look good for Chey.

“We want to go and make sure that he is as well as he can be.

“What was a very strong team performance has really been marred by an injury to a fantastic lad, a good kid and a popular member of our dressing room.

“It doesn’t look good for him.

“I’m delighted with the win but it’s very difficult to have much emotion other than sadness at the moment.

“We’re doing well at the minute, that’s there for everyone to see. You can see the confidence in our players.

“I thought that we passed well, created numerous chances and thoroughly deserved to win.

“I just wish we were going back home with all the players on the bus and Chey in the middle of it.

“It would have been a happy journey back – but it can’t be now.

“The injury to him has just knocked me sideways. I don’t think there’s much else to say.”

As Cook left his brief post-match press conference, he confirmed: “It looks like he’s broken his leg.”

Mark Bowen’s Reading now sit only five points clear of the relegation zone after just one win in their last 10 league matches.

“That was tough to take, very much so,” Reading boss Bowen said. “I’m quite staggered at the moment at what I just witnessed.

“Three months I’ve been here and I’ve spent many times giving the lads pats on the back. And rightly so.

“But tonight is one of those times when it was just unacceptable.

“My job is to take this club forward and I will endeavour to do that, with the last breath in my body.

“But we were outbattled, outplayed and out-everythinged tonight.

“You need work, desire, application and braveness. Anything you want to describe.

“But we didn’t have any of that tonight. There just seemed a casualness about our mentality even going into the game.

“But I’ve no fears about relegation. I know the good players I’ve good here. But it was certainly a wake-up call.”