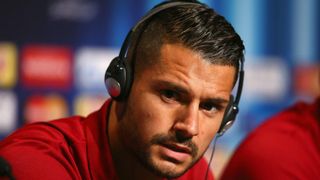 Sevilla president Jose Castro has urged fans not to "insult" Vitolo on Wednesday when he returns to the Ramon Sanchez Pizjuan with Las Palmas following a contentious transfer.

The Spain international enjoyed four successful years with Sevilla after initially leaving Las Palmas in 2013, but he forced through a permanent departure to Atletico Madrid during the close-season by depositing his €37.2 million release clause at LaLiga's offices, before moving on loan to the Canary Island side as his new parent club serve a player registration ban.

Sevilla claim Vitolo's agent had agreed a contract extension earlier in the day which took his release clause to €50m.

Since then, Sevilla have opened legal proceedings against Vitolo, his agents, Atletico and Las Palmas, with the Andalusian club adamant they are owned almost €13m more than they received.

Wednesday's match will be Vitolo's first return to the Ramon Sanchez Pizjuan since the move and he is expected to receive a frosty reception, but Castro hopes supporters have learnt from the episode which almost saw sections of their stadium closed for abuse aimed at Sergio Ramos in January.

"It does not matter whether he comes or not," Castro told Sevilla's official radio station.

"I will not talk about a player who is already at another team. But indifference [from supporters] is the best way to go.

"The fans have come to understand that it is not necessary to insult. A bad atmosphere would hurt us."