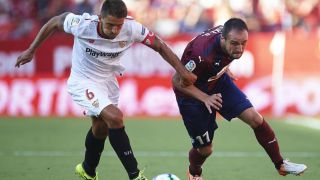 Sevilla defender Daniel Carrico has signed a two-year contract extension, tying him to the club until the end of June 2020.

The centre-back initially joined the club on a season-long loan from Championship side Reading in July 2013, before signing on a permanent basis the following year.

A Portugal international, Carrico was a vital member of Sevilla's squad for all three of their Europa League triumphs in 2014, 2015 and 2016, playing in each final.

But with those issues seemingly a thing of the past, new coach Eduardo Berizzo has tied his vice-captain down for another two years.

A club statement read: "Sevilla FC and Daniel Carrico have reached an agreement for the extension of the contract of the Portuguese centre-back, whose attachment to the club was due to expire this season, until June 2020.

"With this renewal, we guarantee the continuity of one of the captains and leaders of the team, an indisputable starter whenever injuries – which harmed significantly in the last year – have allowed."