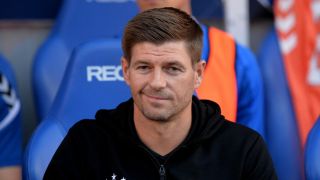 Steven Gerrard cleared his first hurdle as Rangers manager as a 0-0 draw at Shkupi on Tuesday sealed progression to the Europa League second qualifying round.

Having taken a 2-0 first-leg lead to Macedonia, the Scottish Premiership side did what was required to secure a meeting with either Croatian club Osijek or Moldovan side Petrocub.

Rangers largely struggled to repeat the dominance of their Ibrox victory, when goals from James Murphy and James Tavernier gave them a handy advantage.

However, they were rarely troubled in the return encounter, overcoming the occasional nervy passage to secure a second successive clean sheet.

Shkupi created the first real moment of panic in the ninth minute when the ball broke kindly for Ron Broja, but his mishit attempt was blocked and hurried clear.

Rangers came under further examination just prior to the 20-minute mark as Allan McGregor was forced to push over Blazhe Ilijoski's drive before a sharp double save.

But the hosts' momentum stalled as the half wore on and their hopes of reversing the deficit took another hit with midfielder Basil Nchama limping off just before half-time.

Josh Windass had looked lively in the opening 45 minutes and he continued to threaten after the restart, drawing a tidy diving save from Suat Zendeli.

The goalkeeper had to be at his best again to parry a Tavernier free-kick 25 minutes from time, before substitute Glenn Middleton turned a good chance around the post.

Neither moment would cost Rangers, though, as McGregor made one final save late in normal time to safely move the visitors within three matches of the group stage.