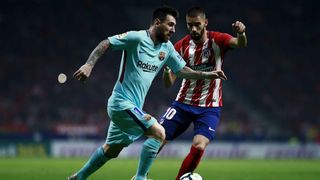 Diego Simeone lauded Barcelona's Lionel Messi after he starred in a draw with Atletico Madrid on Saturday.

Messi was not on the scoresheet against Simeone's Atleti, but he struck the post in the second half and was influential in building Barca's momentum ahead of Luis Suarez's late equaliser.

Simeone picked out his compatriot - who fired Argentina to the 2018 World Cup with a hat-trick against Ecuador earlier this week - for particular praise as he revelled in the occasion at Wanda Metropolitano.

"The stadium was wonderful, we had another night of brilliant football, and with the impressive Messi - extraordinary," the Atleti head coach said.

"Messi was the only one who you could see where, every time he touched the ball, something different could happen.

"He was certainly not as tired as many expected after the trip [from international duty in South America] because he played a tremendous match."

Antoine Griezmann - a reported Barcelona transfer target - failed to find the net at the Wanda for the first time for Atleti, but Simeone believed this was his best performance at the stadium yet.

"For me, this was the best game that Griezmann has had at home," he said. "He twice worked the goalkeeper, he countered with [Angel] Correa and he held the ball up well."

On the match, Simeone added: "It was a great game between two teams with different characteristics. Our first half was very good, the goalkeeper [Marc-Andre ter Stegen] was key.

"From the 60th minute, Barca attacked with more clarity due to their need to score."