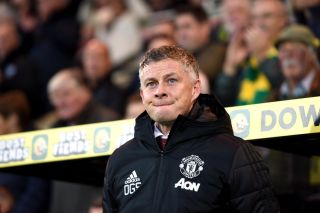 Manchester United boss Ole Gunnar Solskjaer believes his side were incorrectly awarded a penalty by VAR during their 3-1 Premier League win at Norwich on Sunday.

The Red Devils missed two spot-kicks at Carrow Road, with Solskjaer also claiming both should have been retaken because of encroachment by goalkeeper Tim Krul.

Scott McTominay gave United the lead with the club’s 2,000th Premier League goal, before the visitors were awarded a penalty following a lengthy VAR review when Ben Godfrey was deemed to have brought down Daniel James in the box.

Rashford’s effort from the spot was saved by Krul, but the England international made up for it moments later, bagging his 50th United goal.

Solskjaer’s side then missed their second penalty before half-time, when Martial was denied as Krul guessed correctly again to keep his side in the game.

Martial then atoned for his own penalty miss with a goal in the 73rd minute, before Norwich pulled one back in the 88th through half-time substitute Onel Hernandez.

But Solskjaer questioned the decision to award his side’s first penalty of the afternoon.

“First one I don’t think is a penalty because when it takes two minutes to make the decision it’s not clear and obvious, so for me that’s the wrong one,” he said.

“Both penalties should have been retaken. He’s off his line by a yard, the keeper, for both of them, so even though I didn’t think the first one should have been a penalty, they could have come back and given him another chance.”

Solskjaer’s side ended their 11-match run without a win away from Old Trafford by beating Partizan Belgrade in the Europa League in midweek, and backed it up with an impressive performance on Sunday.

“Two away wins in three days is not bad,” he added. “It’s been of course too long but it’s great to have it done and of course this performance was a pleasing thing.

“It’s a difficult place to come to but when we’re as focused and concentrated and on the front foot as we were today, we can beat anyone away from home.”

Norwich manager Daniel Farke agreed with Solskjaer’s assessment of the first penalty decision and was full of praise for his goalkeeper’s performance, although he expressed concern about a knee issue picked up by the Dutchman.

“Tim is great,” he said. “During the whole season he is there with great performances, great character, great leader.

“I am very concerned with his injury because he overstretched his knee and thank God he could finish the game, but we have to wait right now for the assessment tomorrow.

“I hope it is not too bad. He was a bit concerned because it was the same knee he had the ACL damage earlier in his career.

“We do not need any more injuries but let’s wait and see what the doctor says. I am pretty, pretty concerned about the injury because he is one of our leaders.”

Ibrahim Amadou also appeared to sustain an injury, finishing the game in the number 10 role to minimise running, and Farke said the French player had felt some pain in his knee.

Jamal Lewis was substituted at half-time with an illness, while Emiliano Buendia suffered a knock to his shin, the Canaries boss said.