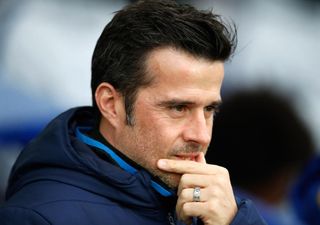 Silva’s side go into Sunday’s Goodison Park clash smarting from their 2-0 defeat at relegated Fulham last weekend which threatens to end their season on a low note.

But Silva believes the trip to United will provide a timely challenge for his men – and a very different one to that posed by Jose Mourinho’s line-up which edged a 2-1 win at Goodison Park in October.

Silva said: “We have big respect for Manchester United, but if we can reach the level we have reached in our last three home games it will be really tough for them.

“They are different coaches and different formations, because with Solskjaer they are changing many times, and not just playing with one system or one formation.

“They have quality players and they can play with six or seven different players in the attack line. They have shown us why they have high quality, but I am 100 per cent sure we can make it tough for them.”

Silva will still be without Colombian defender Yerry Mina, who returned from international duty with a minor injury and will need another week before he resumes full training.

Morgan Schneiderlin is ready to return after an ankle injury, but Andre Gomes starts the first of a three-match suspension after accepting a charge of violent conduct arising from the defeat at Craven Cottage.