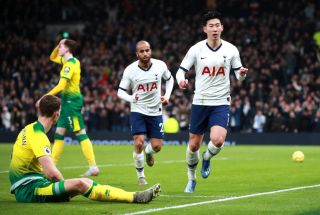 Son Heung-min was the hero for Tottenham as they kept their top-four hopes alive with an uninspiring 2-1 win over Norwich.

The South Korean ended a seven-game scoring drought as he nodded home 11 minutes from time just when Spurs were on the rack.

They had taken a first-half lead through Dele Alli, but Teemu Pukki’s penalty drew Norwich level and it was the visitors who were in the ascendancy.

Spurs rallied to get the win, their first in the Premier League since Boxing Day which cuts the gap on Chelsea to six points, but not many people, not least Jose Mourinho, will think they are capable of finishing in the top four on this showing.

They did at least find the net, their first in the league since Harry Kane’s possible season-ending injury and Mourinho will hope by the time they play Manchester City in 10 days they will have a replacement in.

Real Sociedad striker Willian Jose is the latest target to be linked and the Brazilian was left out of the La Liga side’s Copa Del Rey win over Espanyol at his own request.

For Norwich, defeat will be hard to take as they missed the chance to cut the gap to safety, which still stands at six points.

In the absence of a replacement for Kane, Mourinho has been drilling his side on playing without a number nine as they try to find a way to score goals.

They made a bright start in putting their new style into practice and could have taken a 10th-minute lead as Serge Aurier’s cross found Erik Lamela, but the Argentinian’s volley was palmed away by Tim Krul.

Norwich found joy against Spurs in the reverse fixture three and a half weeks ago and had a brilliant chance as Todd Cantwell and Pukki cut them open, but the latter shot wide from a good position in the box.

Mourinho had said that his side’s plight would be much easier if they were able to score the first goal and his frustration would have only increased on the half-hour after Son’s wasteful finish following a fine through ball by Lucas Moura.

But eight minutes later he got his wish as Alli, who was the last Spurs player to score from open play in the Premier League, opened the scoring.

Giovani Lo Celso, Tottenham’s best player, showed tenacity to win the ball back, allowing Serge Aurier to send a low cross in which Alli tapped in from close range.

Son had another chance early in the second half when he wildly shot over after Toby Alderweireld’s long ball sent him in the clear.

But then Spurs had some defending to do as Norwich enjoyed a prolonged spell of pressure in search of an equaliser.

Pukki put another effort wide and then saw a shot cleared off the line after a scramble which saw Spurs midfielder Harry Winks pick up a serious looking ankle injury.

VAR took over two minutes to decide it was a foul and Pukki was a relieved man after Hugo Lloris got a hand to the spot-kick but could not keep it out.

It gave Norwich even more wind to their sails and Pukki would have had a tap in had Ondrej Duda’s pass beaten Eric Dier.

Spurs fans were booing after another Norwich attack but moments later they were cheering as their side regained their lead in the 79th minute.

It was completely against the run of play but Lo Celso played a delicious reverse pass to Alli, whose deflected shot looped up to the far post where Son could not miss.

They held on with relative ease, but this was one they got away with.