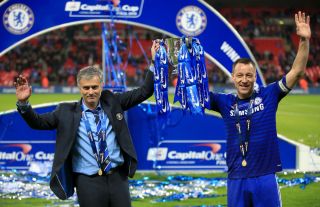 Graeme Souness believes Jose Mourinho is the “perfect fit” for Tottenham and will win trophies with the London club to prove his critics wrong.

Former Manchester United and Chelsea boss Mourinho has been named as the new Spurs head coach following the sacking of Mauricio Pochettino on Tuesday.

Mourinho, who won three Premier League titles with Chelsea, had been out of the game since his reign at United ended in bitter fashion last December.

Souness, the former Liverpool and Newcastle manager, told Sky Sports News: “He is a guy that has won trophies wherever he has been. I would expect him to do the same at Spurs.

“Spurs have won three trophies in 28 years. For a big club that’s just not good enough.

“Spurs are genuinely a big football club and they need someone that can turn what is perceived to be attacking, attractive football into maybe a slightly more pragmatic approach that will put some silverware in the boardroom, and I think he is the perfect fit for them.

“He is an angry man, deep inside. He’s a frustrated man, the way it turned out at United. I think Spurs will reap the benefit of that.

“He knew he was going to go back and he was just waiting for the right one. He loves the English game.

“Our football right now is the one everyone wants to watch. The spotlight is on us. He likes to be in the spotlight. He has got a big personality but he truly is a football person.

“I think Spurs are getting the right man at the right time. He feels he has a point to prove to people who doubted him or were critical of him. He will want to ram those words down his critics’ throats.”

Pochettino, who had been at Spurs since May 2014, made a big impact at the club and secured top-four Premier League finishes in four successive campaigns and reached last season’s Champions League final.

Captain Harry Kane tweeted: “Gaffer. I’ll be forever thankful to you for helping me achieve my dreams. We’ve had some amazing moments in the last 5 and a half years that I will never forget. You were my manager but my friend as well and I thank you for that relationship. Good luck with your next chapter!”

Souness, however, feels the team have failed to kick on and was not surprised by Pochettino’s dismissal.

The Scot said: “It’s been coming. Mauricio Pochettino appeared to be a man who didn’t want to be at Spurs, which seems very strange. It seemed he was unhappy with something.

“I’ve never heard anyone say who’s actually responsible for bringing players to Spurs – was it the manager or someone further up the tree?

“I can only think that is why he was unhappy – someone else is making football decisions.

“But for whatever reason, and it’s not a recent thing, he’s not wanted to be there. He has been a very unhappy bunny.

“Their poor form goes back to last year. I think it was 20 games in total they lost. When teams can lose 20 games in a season against some very ordinary opposition and then get to the final of the Champions League, you’d have to say it was a fluke. That camouflaged the real situation at Spurs.”

Amazing how some have bought into "Mourinho the winner" without any regard for how he leaves clubs.— Stan Collymore (@StanCollymore) November 20, 2019

Former Liverpool and Aston Villa striker Stan Collymore, however, believes Spurs have got it wrong by bringing in Mourinho, highlighting the acrimonious ways he has left various clubs.

Collymore tweeted: “Amazing how some have bought into ‘Mourinho the winner’ without any regard for how he leaves clubs.

“Unbalanced, fractured, overspending,soulless. Everything Spurs tried to avoid. Good luck, I like Spurs a lot, but it’s not how this man comes in, it’s how he’ll leave you.”