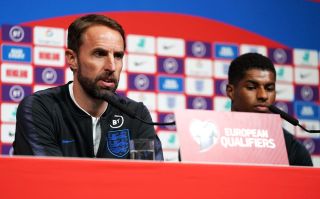 Gareth Southgate says having a selection headache is a nice thing for him as England manager.

Ahead of Saturday’s Euro 2020 qualifier against Bulgaria, Southgate would not give too much away about his starting XI as he sat alongside Manchester United striker Marcus Rashford.

He said: “The competition for places is a great thing for us. As a coach, that’s an enjoyable problem to have.”

On Rashford, Southgate added: “In terms of England, he’s been a really consistent performer for us. It’s great to see him have additional responsibility at United.”

On England’s chances of qualifying for Euro 2020, Southgate stressed that it would be a tough battle.

The Three Lions began their Group A campaign with two wins from two and will be looking to build on that in their first fixture of the 2018-19 season.

He added: “I think there are a number of teams who equally on their day – as was proved in the summer – are able to beat us as well.

“We have to strive to keep winning and keep pushing each other each day in training and if we do that, we’ll take those performances onto the field.”

Earlier this week, Chris Powell was appointed as a coach in the England set-up and Southgate hopes he can bring some extra qualities.

Southgate said of the decision to appoint the former Charlton, Huddersfield and Southend boss: “We’re trying to be at the forefront of giving opportunities to coaches from minority ethnic groups and Chris is a good example of someone who’s fully qualified, has good experience as a manager and obviously experience of international football – he has actually worked with some of the players in our squad when he was a club manager.

“So, I’m hoping it’s going to be a brilliant insight for him into how we work.

“He’ll be able to bring qualities we don’t have within our coaching team.

“We hope to create role models that young people can aspire to.

Ahead of the match, Rashford called on social media platforms to do more to tackle online racist abuse.

The United forward said: “It’s obviously disappointing. It seems to me like things have been going backwards rather than forwards.

What dreams are made of @Englandhttps://t.co/M7xrzF7y7S— Marcus Rashford (@MarcusRashford) September 4, 2019

“All around the world people have been standing together and that’s all we can do. We have to rely on the campaigns to deal with the situation because our voice (as players) only has so much power.

“For me, it’s too easy to do whatever you like on the internet. Any of us now could go on and create accounts and write what we want under anybody’s posts and nobody would ever know.

“It’s easy to figure it out and if you have to show identification to create an account that means everybody can only have one account. For me, there’s hundreds of thousands of people that use my name on social media and they can write what they like.”

The boss says @JesseLingard is the only doubt ahead of the game, having missed this morning's session with a minor illness.https://t.co/7Ps99BqsAE— England (@England) September 6, 2019

A Football Association spokesman told the PA news agency that the Manchester United player had been kept away from the rest of the team as a precaution, but was still hopefully available for selection for the match at Wembley.

A back problem has already ruled out Lingard’s United team-mate Aaron Wan-Bissaka.