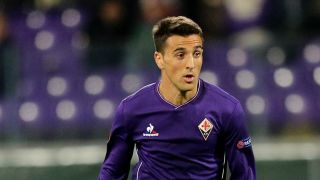 The midfielder completed his move to the San Siro for a reported €24million last week, following his former Fiorentina team-mate Borja Valero to Inter.

Spalletti's Inter enjoyed a strong pre-season, with wins against Bundesliga champions Bayern Munich and Premier League winners Chelsea the highlights, and Vecino said the chance to work with the former Roma coach was key to his decision to leave Fiorentina after four years at the club.

"As a young boy, I played as an attacking midfielder but I then moved back, playing as a defensive midfielder or central midfield," Vecino said. "I like to get forward in order to exploit space but I'm completely available what the manager wants.

"Spalletti struck me with the way he teaches football, for his calmness and his ability in communicating his ideas. He wants to start the play from deep which is an idea that I like and am used to."

| on his new responsibilities playing in front of the fans. August 10, 2017

The 25-year-old Uruguay international believes Inter is the right club for his development, although they finished only a single place above Fiorentina in the Serie A table last season.

"It's the right time to arrive at a big team. I have my best years ahead of me as a player," Vecino said. "I've developed a lot since I've been in Italy and now I'll have to do even better.

"I was really happy when I heard of interest from Inter and I hoped that negotiations would finish as quickly as possible. There's little need to think when such a prestigious club contacts you."