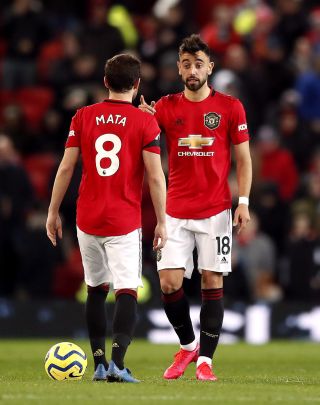 Aaron Wan-Bissaka says Bruno Fernandes has made a smooth start at Manchester United thanks to the club’s Spanish contingent.

Portugal midfielder Fernandes is set to make his second United appearance at Chelsea on Monday night as Ole Gunnar Solskjaer’s side return to action following their winter break.

Fernandes – who Solskjaer described as a “conductor” before the Premier League trip to Stamford Bridge – impressed on his debut two weeks ago when United drew 0-0 with Wolves at Old Trafford.

We can't take our eyes off this 👀 @B_Fernandes8 🎯 #MUFCpic.twitter.com/cuEqWPFJKw— Manchester United (@ManUtd) February 15, 2020

The 25-year-old, signed from Sporting Lisbon in a deal worth an initial £46.6million, has since got to know his new team-mates at United’s training camp at Marbella with the help of David De Gea and Juan Mata.

“I think he (Fernandes) has settled in right,” Wan-Bissaka told the official United website.

“He’s got a few of the Spanish players looking after him and we’re just looking forward to what he brings to the team.”

The United players had a week off after the Wolves game before heading to the Costa del Sol.

The Red Devils are six points behind fourth-placed Chelsea in the race for a Champions League spot, but have beaten Frank Lampard’s side twice this season.

They won 4-0 at Old Trafford on the Premier League’s opening weekend in August and 2-1 at Stamford Bridge in a Carabao Cup tie in October.

“It felt good, after the week off we had,” Wan-Bissaka said of the trip to Spain.

“It’s good to be out in the sun and to regroup with the team.

“I think it was needed, with the amount of games we’d been playing. (It’s) something that helped a lot.”

Dutch defender Timothy Fosu-Mensah, 22, hopes to be available before the end of February after recovering from a cruciate knee injury.

Fosu-Mensah returned for the Under-23s last month but then picked up a quad injury.

“I hope to be back this month, definitely,” he said. “I just can’t wait to be back.

Coming back stronger for #MUFC 📈@TFosuMensah is all about getting the gains in his recovery 💪 pic.twitter.com/Y7C5JNFDiC— Manchester United (@ManUtd) February 14, 2020

“I had a problem with my quad and I think it needed one or two weeks (of recovery) so it came at the right time for me to be back with the team and to keep going with my progress.”

On his long absence, Fosu-Mensah added: “This was my first big injury.

“I had a little problem with my shoulder (before), for two weeks or three weeks, but this time I did my ligament and it took me eight and a half months to get back, so it’s very difficult.

“But I had the right people around me and the club was looking after me so it’s a learning process as well in my career.”