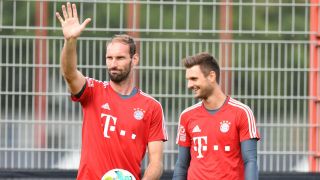 Tom Starke has only been included in Bayern Munich's Champions League squad as a contingency in the absence of the injured Manuel Neuer, according to sporting director Hasan Salihamidzic.

Starke, 36, retired at the end of last season but has been lured back to Allianz Arena in 2017-18 as cover for Germany international Neuer, who is not expected to return to action until January after suffering a fractured metatarsal in his left foot.

Neuer's understudy Sven Ulreich has come under scrutiny following an error that led to a goal as Bayern gave up a 2-0 lead to draw 2-2 at home to Wolfsburg in the Bundesliga last time out.

Salihamidzic, though, has insisted Starke is unlikely to find himself in competitive action when Bayern face Paris Saint-Germain away in the Champions League on Wednesday.

"Starke is the number three," he told Bild.

"He considers himself an alternative for Ulreich and [Christian] Fruchtl. We do not expect that a goalkeeper will be injured, but we want to be prepared for anything.

"And the transfer market is now [closed] up to the winter break, too."

Carlo Ancelotti has also made it clear he is not considering dropping Ulreich in the wake of that mistake. Asked if 17-year-old Fruchtl was in contention for a starting berth, the coach simply replied: "No."