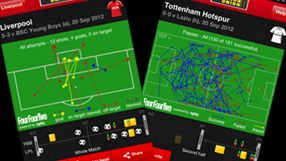 This week sees the launch of the FourFourTwo Europa League Stats Zone app in association with Western Union – the latest extension of the Opta-powered analysis tool that's won awards and millions of shares around the world.

The free app is the first of its kind for the Europa League, but it brings the easy interface familiar to fans of Stats Zone, allowing users to track every pass, tackle, shot, foul or assist of each member of the 48 teams from 25 countries in this year's competition.

The Stats Zone app runs alongside the PASS scheme – set up by Western Union, the global partner of the UEFA Europa League – which counts every pass as a day of school for students around the world.

Over the next three seasons, the PASS initiative aims to reach one million school days, adding to the work Western Union has already done to aid education globally.

LINKPatrick Vieira on the PASS initiative

The original Stats Zone app was listed in Apple's Apps of the Year 2011, won three AOP 2012 Awards (including the Grand Prix) and was recently crowned App of the Year at the 2012 PPA Digital Publishing Awards. It was shared more than 2.2 million times in Europe alone.

The app is available to download for free now from the iTunes store.