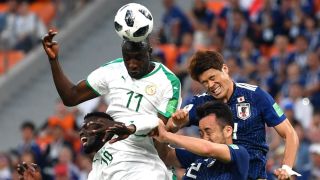 A combination of Senegal's strength and the lightning quick Sadio Mane menaced Japan's defence, but the Samurai Blue also demonstrated their cutting edge in a 2-2 draw in Ekaterinburg on Sunday to offer a warning to potential last-16 opponents England and Belgium.

Here in Russia, the Three Lions and Red Devils have enjoyed the luxury of cruising through to the knockout stages of a major tournament with a match to spare, England having crushed Panama 6-1, a day after Belgium swatted aside Tunisia 5-2.

A showdown between the two in Kaliningrad on Thursday will determine who secures top spot and an assignment in Rostov-on-Don, or the mission to Moscow that will befall the runners-up.

Supporters of the two countries can justifiably hope to reach the quarter-finals, as they examine the prospect of overcoming their potential opponents from a wide-open Group H.

Indeed, when charting a possible course through to the latter stages of the event, the teams boasting the likes of Robert Lewandowski, Piotr Zielinski, James Rodriguez and Radamel Falcao might have loomed as more probable obstacles.

Instead it was Japan and Senegal who took early control by winning their opening matches 2-1, at the expense of Colombia and Poland respectively.

They continued to state their credentials when drawing 2-2 at Ekaterinburg Arena, where Mane exhibited the raw speed and work-rate that have made him such a valuable member of the attacking trident responsible for firing Liverpool to the Champions League final.

Four goals shared between and in Ekaterinburg.Good game, that. June 24, 2018

The forward could be found tearing down either flank throughout the first half, offering a welcome outlet to his team-mates and causing regular problems for Japan's defence, who eventually adjusted to more effectively nullify the threat after the break.

Should Mane come up against England, the wing-backs that have provided Gareth Southgate's team with width and an attacking threat may find themselves engaged in less proactive duties.

At least in Kyle Walker, John Stones and Harry Maguire as a back three, England have more pace than most central defences.

The same, perhaps, cannot be said of Belgium.

With a makeshift wing-back in Yannick Carrasco and two excellent but slightly more ponderous centre-backs, Toby Alderweireld and Jan Vertonghen, alongside the quicker but less gifted Dedryck Boyata or an injury-plagued Vincent Kompany, Mane may fancy his chances of pouncing should lapses occur in the Red Devils' anticipated dominance of possession.

If Japan, meanwhile, are the team to be scouted, a less obvious puzzle will present itself to the analysts. Having been parachuted in to replace Vahid Halilhodzic, head coach Akira Nishino has the Samurai Blue functioning as a balanced, efficient unit.

Mere inches prevented Yuya Osako and Takashi Inui from making it 2-1 after Yuto Nagatomo's brilliant assist to supply the latter for the equaliser to Mane's opener, before Moussa Wague struck to restore his team's lead, completing a move in which Senegal's superior strength - an asset remarked upon by Nishino during the build-up - came to the fore.

Japan, though, refused to give up, Keisuke Honda slotting home to reward the persistence identified by Nishino as the solution to their relative physical deficiencies, and which could yet be put to more good work derailing the last-eight ambitions of England and Belgium.