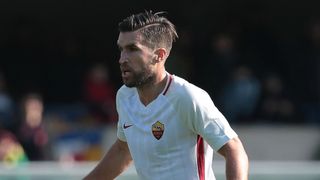 Kevin Strootman expects to stay at Roma for the long haul to show his gratitude to the Serie A club for standing by him during serious injury problems.

Strootman has featured in 20 out of Roma's 24 league games this season, with the Giallorossi fourth in the table and on track for Champions League qualification.

The Netherlands international was linked with a move to Liverpool during the January transfer window, having proved his fitness after managing only 11 league appearances across the 2014-15 and 2015-16 campaigns.

But Strootman confirmed he sees his future at Roma regardless of speculation the 28-year-old could leave the club.

"I've extended my contract and want to stay here for a long time," Strootman – who signed a long-term deal in May 2017 – told Sky Italia.

"I have a deep gratitude to Roma, who waited for me after three surgeries, I will never forget that.

"I wanted to play in the Champions League last year, I hope we'll be able to finish among the top four in the league, even if it's a pity we couldn't keep fighting at the top against Napoli and Juventus."

The Serie A title race appears to be between Napoli and defending champions Juventus, with Maurizio Sarri's side a point clear with 14 games remaining.