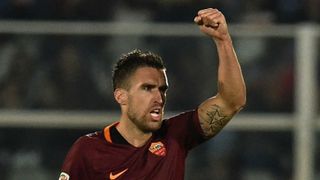 Roma have been handed a major boost after midfielder Kevin Strootman signed a new five-year contract, tying him to the Serie A runners-up until 2022.

Strootman, 27, impressed in making 33 league appearances for Roma this season, having been restricted to only 11 across the previous two campaigns due to injury woes.

He joined the Serie A side from PSV in 2013 in a deal that can reportedly reach a total value of €19million.

Strootman is now determined to deliver success to Roma in the next five years after taking great comfort in the backing of the club's supporters during his time on the sidelines.

"This extension is special for me," Strootman said. "I really want to win something here, and I will do everything I can to achieve that.

"Everyone at the club was behind me during my injury, and that is another reason I am delighted to stay."

Roma sealed qualification for next season's Champions League group stage with a 3-2 victory over Genoa on Sunday, Strootman playing the full 90 minutes.

He also has 32 caps for the Netherlands since making his international debut in 2011.