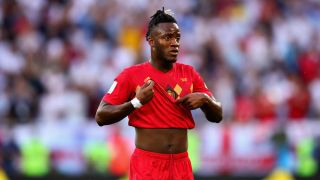 Dries Mertens joked that Michy Batshuayi is a "stupid guy" and suggested he smashed the ball into his own face to gain more social media followers.

Batshuayi went viral after an attempted goal celebration during the 1-0 World Cup defeat of England went wrong, the striker smashing the ball against the post and not able to duck away in time when it rebounded into his face.

"Ahahha I knew I would be f***** the minute I come to my mentions. Why am I so stupid bro. S*** hurts," Batshuayi wrote on Twitter, going on to share a clip of the bizarre moment.

"Fortnite celebrations [are] so overrated bro I had to create something new."

And Batshuayi's Belgium colleagues do not have much sympathy for their luckless team-mate.

"He [Batshuayi] is a bit of a stupid guy, we like to joke with him," Mertens told a news conference.

"I think he is very funny on social media and everything and I don't know if he did it for extra followers or something.

"But it was really funny."

Adnan Januzaj's goal - his first for Belgium - ensured his side set up a last-16 tie with Japan, although Batshuayi's celebration overshadowed him.

"But unfortunately for him he hit the post, but then he scored a header which was nice.

"But yeah, it was a funny celebration to see."