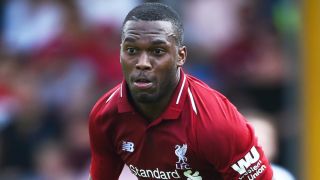 Liverpool striker Daniel Sturridge sees his future at Anfield and is prepared to fight for his place in Jurgen Klopp's team "week in, week out".

Sturridge scored two goals in nine Premier League appearances for the Reds in 2017-18 before being loaned out to West Brom for the second half of the season.

The 28-year-old England international failed to find the net for the Baggies in his six appearances and again struggled with a hamstring injury while at The Hawthorns.

However, Sturridge says pre-season is going to plan and he hopes to force his way back into Klopp's plans.

"I see myself staying at Liverpool, hopefully being part of the team week in, week out," he told the club's website.

"Pre-season is going well, so for me it's keeping my head down and building on that. I'm excited about the season ahead and it feels great to be back."

Sturridge, who joined Liverpool from Chelsea in January 2013, enjoyed his best season in a red shirt when he played alongside Raheem Sterling and Luis Suarez in 2013-14, scoring 21 goals in 29 league games.

Persistent injuries have made him something of a peripheral figure since Klopp took charge in October 2015, but, having scored twice in Liverpool's 7-0 friendly win over Chester on July 7, Sturridge feels in good shape ahead of the pre-season International Champions Cup tournament.

"I am feeling great and can't wait to get the season under way," he said.

"We have the tour to come where we face some great teams like Manchester United, Manchester City and [Borussia] Dortmund."