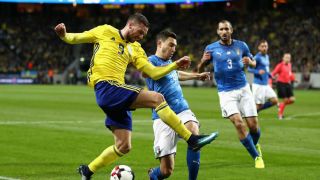 Marcus Berg accused Italy's players of trying to get him sent off as Sweden prevailed 1-0 in an ill-tempered World Cup play-off encounter in Stockholm.

Al Ain's Berg was booked for dissent in the aftermath of strike partner Ola Toivonen catching Leonardo Bonucci with an elbow in the game's first attack.

Bonucci claimed afterwards the incident left him with a broken nose and that Toivonen should have been sent off, while Berg was involved in altercations with Giorgio Chiellini and Daniele De Rossi immediately before substitute Jakob Johansson fired home his deflected 61st-minute winner.

"I got a yellow because I was talking, they have 10 who speak in every situation," Berg told Sportbladet.

"The Italians obviously wanted to get me sent off. They lay down in every situation."

Berg, who scored eight times during Sweden's qualification campaign, left Italy in no doubt that they should expect another physical encounter when the sides reconvene at San Siro on Monday.

"I knew there would be a war today and it will be a damn war on Monday," he added.

Match-winner Johansson praised Sweden for standing firm in the face of perceived provocation.

"The Italians try to play tough and sometimes more than that," he told Sportbladet.

"It is part of the mental game to be able to resist it and to focus on what we are going to do with our game plan. We succeeded well."