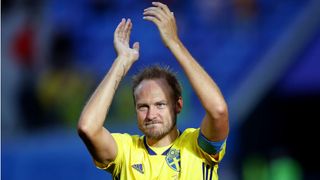 Andreas Granqvist vowed that Sweden will not alter the way they play heading into their World Cup quarter-final with England.

Janne Andersson's side have had less possession than their opponents in three out of their four matches at the World Cup so far, relying on their strong defensive structure to keep teams at bay.

That tactic has worked well, and if not for Toni Kroos' sublime free-kick in the last minute of the Group F clash with Germany, Sweden would have an undefeated record in Russia.

And Granqvist, who has scored twice from the penalty spot, claims Sweden have no plans to change how they set up when it comes to facing England in Samara on Saturday.

"Normally the other teams have better players on paper. We let them have the ball in the places we want them to have the ball," Sweden's captain, who will return to Helsingborgs IF at the end of his World Cup campaign, told reporters.

2 - Sweden have won back-to-back World Cup matches for the first time since 1958, when they won the quarter-final and semi-final on their way to the final as host nation that year. Rising. 3 July 2018

"If you look at the games we have played, of course the opponents have more ball possession, but we have created more chances.

"This is how we play, this is what we need to do. This is our strength and we need to show our quality against other strong teams.

"This is the way for us to have success and we're going to continue this way."