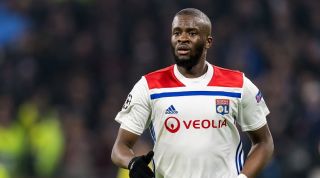 Lyon president Jean-Michel Aulas says he would rather sell Tanguy Ndombele to Juventus than Manchester United or Manchester City.

The French midfielder has enjoyed a superb season with the Les Gones, scoring two goals and providing six assists across 38 appearances in Ligue 1 and the Champions League.

The 22-year-old looks set to depart the Groupama Stadium this summer, with a host of European giants chasing his signature.

However, Aulas would prefer the youngster to move to Serie A rather than the Premier League.

"Are Juventus after Ndombele? Yes it's true. But PSG are also there, Manchester United and City too,” he said.

"Honestly, I would like to see Ndombele at Juventus with [Miralem] Pjanic, a player that broke out at Lyon and a player I am still very attached to. We will see what happens.

“In the sale of a player, the economic parameters are the priority. But if offers are equal, I would offer him to [Juventus president] Andrea Agnelli.”

Lyon face Lille on Sunday as they attempt to secure a top-three finish in Ligue 1.

The 7 most unlikely Champions League finalists ever