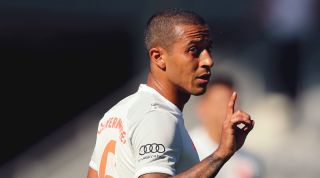 Thiago Alcantara of Bayern Munich has been the subject of speculation for a long time now about a move to Premier League champions Liverpool - but now, he could be set to snub the Reds for Manchester City.

City are said to be interested in the services of the midfielder, with David Silva leaving the club as soon as their Champions League campaign is over. Pep Guardiola is a big fan of Thiago, having worked with him originally at Barcelona, before bringing him over to Bayern when he got the manager's job there.

Should Thiago move to Eastlands, he would become the first footballer to have worked with Guardiola at all three of the clubs he's managed.

The Spanish midfielder was said to be excited by a move to Liverpool. Reports suggested that Thiago had told Bayern that he wanted to go and that the club accepted his decision - it was thought though that he was keener on the transfer to Anfield than Jurgen Klopp himself, who had doubts over the player's age, profile and injury history.

Manchester City are likely to have offered more money for Thiago, triggering a bidding war for the player. It's likely that other Premier League clubs may monitor the situation too.

Arsenal are set to lose loanee Dani Ceballos to parent club Real Madrid, while Manchester United have long been admirers of Thiago. Chelsea, too, may be interested in bringing another midfielder comfortable in possession to their ranks.

Ultimately, however, it is likely that Liverpool still have the upper hand in this saga. Man City may be offering more money - putting them in pole position financially - but their interest may have been exaggerated by the player's agent to force the Fenway Sports Group into action over a bid.

Regardless, the Bayern talisman would be an excellent signing for Guardiola. Given his ability to operate as a lone No.6 similarly to Ilkay Gundogan, as a No.8 dictating tempo on the opposite side of Kevin De Bruyne, or in a double-pivot, were City to use more of a 4-2-3-1 shape as they have at times after lockdown, Thiago would be an asset - especially while Phil Foden is still developing as a player.

City fans, too, would relish the idea of stealing a march on Liverpool and snatching a world-class playmaker of Thiago's ability away from their closest rivals in the table.