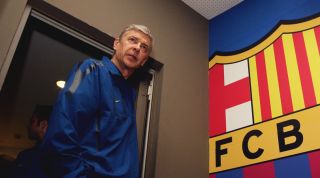 Former Arsenal manager Arsene Wenger has reportedly had talks with Barcelona recently to become their next manager.

The Catalan giants only hired Quique Setien as their latest boss in January but the club apparently spoke to Wenger - now working at FIFA - about a return to the dugout.

Despite being 70 years old now, Wenger has openly spoken about how much he misses coaching day to day. The Frenchman took charge of Arsenal for 26 years, leaving the club in 2018 after a second successive failure to qualify for the Champions League.

Barcelona are not the only admirers of Wenger and his brand of football. Since leaving North London, the Frenchman has been approached by AC Milan, Bayern Munich and even Fulham to take over. While at Arsenal, he apparently rejected the England job, as well as Real Madrid on numerous occasions.

Barca head into a Champions League quarter-final against Bayern on Friday after a 3-1 win over Napoli last Saturday. The Camp Nou hierarchy are said to be less than impressed with the manner in which the side surrendered the La Liga title to Real Madrid in the final weeks of the season, coupled with the failure of Barca's high-profile stars to gel together.

Antoine Griezmann has struggled to find form after moving for over £100m last summer from Atletico Madrid. Recently, the World Cup winner found himself dropped for emergency signing Martin Braithwaite, as Setien has faced problems trying to integrate Griezmann and Lionel Messi into his favoured 4-3-3.

Barcelona are said to be keen on bringing club legend Xavi back to the club in a coaching capacity, though his current contract at Qatari club Al-Sadd apparently doesn't expire until next summer.

Wenger - like Barca's former manager Ernesto Valverde - would most probably favour a double-pivot in midfield, were he the manager at Camp Nou. Having previously lured the likes of Cesc Fabregas to London Colney - and even attempted to sign Lionel Messi early on his career - the Frenchman would likely place an emphasis back onto bringing through La Masia graduates, while having tried to bring Kylian Mbappe to Arsenal too, Barca may well have found themselves linked with a move for the star.

While Wenger's expression-led philosophy paved the way for a new dawn at Arsenal in the 1990s, the club could have actually gone down a road more like Barcelona themselves: the Gunners were linked with Barca legend Johan Cruyff at the time, before opting for the unknown quality of Wenger.

Quique Setien's future will again be under the microscope, should Barcelona fail to progress to the final four of the Champions League, this week.