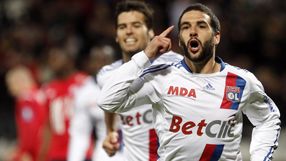 Brazilian midfielder Ederson is back in training after missing several months with a knee problem but is unlikely to be risked at PSG with playmaker Yoann Gourcuff and forward Lisandro Lopez also not yet fully fit after injuries.

Clement Grenier also looks set to miss out after hobbling off in Tuesday's 2-0 Champions League win over Dinamo Zagreb.

Lyon's good form and the fact Brazil winger Michel Bastos has committed himself to the club until 2015 having seemed poised for a move a few months ago will soften any blow though.

Striker Bafetimbi Gomis is also in red-hot form meaning Lisandro is not being missed as much as expected.

"Gomis is walking on water right now, we are really happy for him," team mate Jimmy Briand told reporters.

Lyon and PSG have identical records of 17 points from eight games with the same goal difference and, despite Lille winning the double last term, the duo are favourites with the bookmakers for title glory in the current campaign.

The capital side made a slow start after their close-season spending spree having been bought by ambitious Qatari investors but they are now really hitting their stride.

Record French signing Javier Pastore is showing his worth, with the Argentine's silky skills and eye for goal rarely seen at previous club Palermo, while another recruit from Italy, ex-Juventus midfielder Mohamed Sissoko, is finally fit for a debut.

"Players like Sissoko are integrating into the group and are ready to play," PSG coach Antoine Kombouare told reporters.