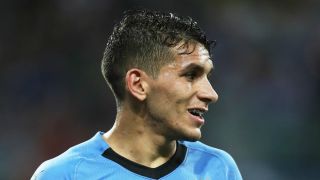 Lucas Torreira was unaware that Arsenal fans tracked his flight to London when he travelled to sign for the club in a reported £26million switch from Sampdoria.

Gunners supporters followed developments in Torreira's transfer closely and details of which flight the 22-year-old boarded to London were shared on social media before his arrival at Emirates Stadium.

While the Uruguay international was unaware his journey was being documented, he said he was inundated with messages from Arsenal fans who had gotten wind of his move to Unai Emery's side.

When asked about the flight-tracking supporters, the World Cup quarter-finalist told Arsenal's official website: "No, I didn't know about it, but I am here and I will see them all soon.

"For a while I've been receiving loads of messages in my social media accounts. I guess it's all down to the fact there were talks of me moving to Arsenal even before the World Cup started.

"I am used to coping with this kind of thing in the best possible way. It's a very positive thing that people want to welcome me. It makes me feel comfortable. Now I am calm and I look forward to the future, which for sure will be very nice."

Torreira featured in all five of Uruguay's World Cup matches and started the last three as Oscar Tabarez's men reached the quarter-finals before losing 2-0 to France.

The combative midfielder reflected on the experience, saying: "I feel very proud of it, it all turned out great for me.

"I wasn't part of the team during the World Cup qualifiers, but eventually I made it to the World Cup. It was marvellous to experience World Cup moments with the Uruguay squad family.

"I tried to enjoy the World Cup as much as I could."