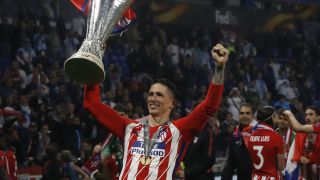 Fernando Torres will join former Spain team-mate Andres Iniesta in the J.League next season after agreeing a deal with Sagan Tosu.

The World Cup winner had been linked with moves to the A-League and MLS but – like Iniesta at Vissel Kobe – the next stage of his career will be in Japan.

During an illustrious career in Europe, Torres entertained fans in Spain, England and Italy, enjoying most success with Atletico Madrid.

After coming through the ranks at Atleti, Torres scored 65 Premier League goals for Liverpool before making a £50million move to Chelsea in January 2011.

Despite winning the Champions League and Europa League with the Blues he struggled to recreate his Liverpool form at Stamford Bridge and was sent to AC Milan on loan ahead of the 2014-15 campaign.

More frustration followed but Atletico brought Torres home in 2015, the 34-year-old adding another Europa League crown in his final campaign with the Rojiblancos.

His contract expired at the end of the 2017-18 season and he will continue his career in Asia, following in the footsteps of Barcelona legend Iniesta.

／Welcome to ＼ has decided to join usMore details July 10, 2018

"We have had proposals from all continents," Torres told the media on Tuesday. "My new team will be the Japanese side Sagan Tosu.

"Sagan Tosu were one of the first clubs to be interested in me, they have convinced me with the project.

"I think Japan and the Japanese League is going to be a great experience, they have made a great effort and they believe that I can be one of the solutions so that the team returns to the place where it has to be.

"I've had offers from France, Germany, even some options from Spain, but at no time did it go through my head to go to a European team, I wanted a new challenge in a totally different place."

Torres joins Sagan Tosu with the club in the bottom three after 15 games.