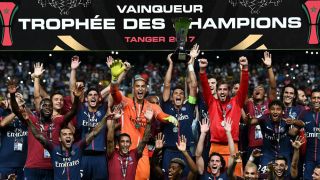 China will play host to the Trophee des Champions in 2018 and 2019, the Ligue de Football Professionnel (LFP) has announced.

The deal was made in partnership with the Kaisa Culture Sports and Tourism Group, with the games to be played in Shenzhen.

The curtain-raiser has been contested outside of France since 2009, with last year's match between Paris Saint-Germain and Monaco, which the former won 2-1, taking place in Tangier.