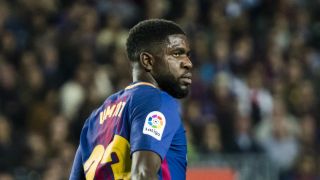 Barcelona have confirmed Samuel Umtiti has extended his contract until 2023, ending speculation the defender could leave the club.

Umtiti will formally sign the five-year deal on Monday, before Barca hold a news conference.

The Catalan giants have not confirmed the new release clause in Umtiti's contract, which previously would have allowed clubs to buy the France international for a cut-price €60million.

Premier League sides Manchester United and Manchester City were among the teams reportedly ready to meet the release clause, but Barcelona will now hold on to the centre-back.

[BREAKING NEWS]We are delighted to announce has renewed his contract at until 2023!June 3, 2018

With the 24-year-old's future now committed to Camp Nou, Umtiti can focus on representing France at the World Cup, where he is expected to start for Didier Deschamps' side.

Umtiti's €60m release clause left Barca open to the possibility of losing one of their younger stars for the second year in succession, after Paris Saint-Germain shocked the world by setting a new record transfer fee with a spectacular €222m move for Brazil superstar Neymar last August.

The defender, though, was open about his desire to extend his stay at Barcelona, with club president Josep Maria Bartomeu stressing he was working to fit Umtiti into their salary structure.

"It is clear that I want to renew with Barcelona and I hope to be on the team next season," Umtiti said to L'Equipe.

"I'm at a club that allowed me to realise my dream of playing there. I'm still under contract at the moment so for me to leave, either they throw me out the door or I decide to leave."

Umtiti has now got his wish, while Barcelona can rest assured they will not lose the centre-back ahead of the 2018-19 campaign.