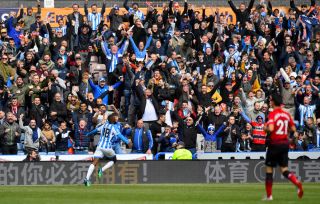 Manchester United’s top-four hopes are over after Isaac Mbenza punished a shambolic display to earn relegated Huddersfield a memorable 1-1 draw in their final Premier League home match of a miserable season.

Poor form meant Ole Gunnar Solskjaer’s side were always going to be relying on unlikely results elsewhere if they were to seal Champions League football, but few expected them to come a cropper at the John Smith’s Stadium.

Scott McTominay got them off to a fine start in West Yorkshire, but, like so many times this season, United faltered.

An error from the normally dependable Luke Shaw allowed Mbenza to score his first goal in English football and give Town fans an all-to-rare reason to cheer as a challenging campaign edges towards its conclusion.

Paul Pogba hit the woodwork for the second time as United chased a late winner, but Huddersfield were able to avoid a record-equalling 15th top-flight home defeat thanks to just their 10th home goal of the campaign.

Those statistics highlight why Town were relegated at end of March and the work required at Old Trafford – a summer rebuilding job made all the more difficult by the fact that Champions League football will not be returning.

The Europa League awaits for United as Huddersfield prepare for life in the Sky Bet Championship, although Mbenza’s strike ensured a positive end to the popular Dean Hoyle’s final home match as chairman.

David De Gea had been the focus ahead of the match given his recent blunders, but attention switched to opposite number Jonas Lossl after just eight minutes.

McTominay did well to make space for himself, but there was no way that the United midfielder’s low shot should have squirmed through the Town goalkeeper’s grasp.

The ball rippled the back of the net and the floodgates looked set to open, only for United to look sloppy and incoherent more often than not.

Alexis Sanchez was working hard but failing to make an attacking impression and Pogba looked off form, although they were involved in an impressive team move that led to Juan Mata curling just wide.

But, in truth, that was an all too rare moment of quality.

Juninho Bacuna sent a low effort just wide from distance as Huddersfield were welcomed on by United’s shaky-looking back line, with De Gea needing to deny Karlan Grant with his feet after a sloppy pass from Phil Jones.

Pogba craned his neck to meet a cross with a header that rattled the crossbar when the visitors tried their luck before half-time, but it was a poor all-round display by a side pushing for a top-four finish.

Shaw struck across the face of goal when play resumed after the break, while Grant curled over after good work by Bacuna at the other end.

Another frustrating afternoon for Sanchez ended prematurely and Tahith Chong came on the injured attacker as United toiled.

And things soon got worse.

A hopeful ball forward should have been dealt with by Shaw, only for a calamitous attempt at a clearance to allow Mbenza in behind to slot through De Gea’s legs and send the home fans wild.

The 23-year-old celebrated his first goal in English football with the gusto you may expect, although the corner flag was a victim of that exuberance.

Snapped when Mbenza kicked it in celebration, United’s embarrassment had several minutes to sink in during a long wait for a replacement flag.

The delay did little to help the visitors as they struggled to make an impact.

Marcus Rashford had efforts and McTominay tried to squeeze home on an afternoon that saw Victor Lindelof go off injured.

Lossl did well to push wide a Chong effort and Pogba hit the crossbar as United pushed for a late winner, although De Gea had to save well with his feet when Huddersfield broke and Grant got a shot away.

But the match would end 1-1, with Solskjaer going over to the United fans straight after the final whistle.