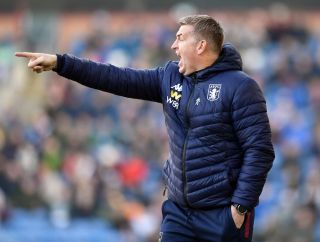 Aston Villa are set to clinch an £8.5million move for Mbwana Samatta but with boss Dean Smith confirming he still needs another striker.

Smith claims it is now just a matter of “dotting the i’s and crossing the t’s” on the deal for Genk’s Tanzania international Samatta, who has scored 61 goals in 165 appearances during his four years with the Belgian club.

Although Samatta’s transfer has now missed the deadline for Tuesday night’s Premier League clash at home to Watford, Smith said of the move for the 27-year-old that “just some paperwork needs completing”.

“It’s disappointing (the deal has not been finalised), we would have wanted him in but, even if he had come in today, he’d have had only one morning with the players.”

Villa face the Hornets without a recognised striker for the fourth consecutive match, with Wesley out for the season with a knee injury and Keinan Davis only just returning to training after three months out with a hamstring problem, while Jonathan Kodjia has joined Qatari side Al-Gharafa.

“The lads have got used to it over the last three or four games,” said Smith.

“Wesley got injured against Burnley in a good performance and a good result, and, since then, we’ve played well at Leicester away in the cup and we did well, and Brighton as well.”

Smith concedes, though, he needs extra firepower. He said: “Yes, I do. It’s something we’re talking about all the time.

“Suso (Jesus Garcia Pitarch, sporting director) believes the same as well. It’s something we’re looking for and looking to press on with as well.”

Smith has confirmed he would never have let Kodjia depart if there had been any doubt over landing Samatta.

“He came back from the AFCON very, very tired after playing a summer series. Our season didn’t finished until May 27. He then got injured at Tottenham and has struggled for fitness since due to game time.

“With his contract being up at the end of the season, we hadn’t offered him a new one, and so he wanted to look at other avenues and we’ve allowed that to happen.”

Kalinic has only made eight appearances since a £5.4million move from Gent a year ago.

“There’s a possibility of Lovre going out, simply because he needs game time,” said Smith.

“He’s a Croatia national goalkeeper, with his country qualifying for the Euros. He wants to get that opportunity to play in the summer.

“I’ve got Pepe (Reina) and Orjan (Nyland) who’s been in fine form for us, so his chances are limited here.”