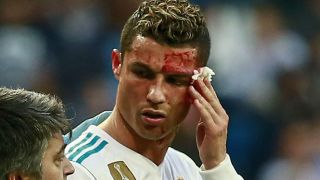 Real Madrid have released treatment-room footage from shortly after Cristiano Ronaldo left the pitch with a head wound during Sunday's 7-1 win over Deportivo La Coruna.

Ronaldo scored twice in the comfortable victory but was caught in the face by the boot of Fabian Schar in netting his second - Madrid's sixth - and walked from the field covered in blood, assessing the damage on a mobile phone.

Madrid have now shared a video of Ronaldo being cleaned up in the immediate aftermath of the injury, showing the laceration occurred worryingly close to the five-time Ballon d'Or winner's eye.

Ronaldo required stitches and you can check out the wound pre-treatment here...