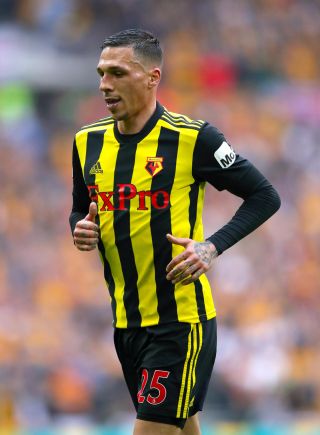 Watford head coach Javi Gracia hit out at the decision to send off Jose Holebas in Sunday’s defeat to West Ham and is adamant the club will appeal against it – with the defender set to miss out on the FA Cup final as a result of his dismissal.

The 34-year-old was shown a red card in the second half of the Hornets’ 4-1 loss to West Ham in the last game of the Premier League season at Vicarage Road.

Hammers skipper Mark Noble started and ended the scoring with a fine individual effort and a late penalty, with Manuel Lanzini and Marko Arnautovic also in on the act in a comfortable win.

Gerard Deulofeu had pulled one back for the hosts 11 seconds into the second half, only for Holebas to be sent off after he was adjudged to have barged over Michail Antonio.

Gracia insists the red card will be challenged, with the suspension ruling Holebas out of Saturday’s FA Cup final against Manchester City if it is not overturned.

Asked if the club would appeal against it, Gracia replied: “For sure. I kept the same attitude during all of the season and I don’t want to change at the last one.

“I prefer to be respectful to the referees decision and I prefer at this moment to not say what I am thinking about that.

“Maybe it is a foul, soft foul, light foul but I can be angry with that decision.

“In this moment it is difficult to accept knowing you have an important game next week.”

Gracia likened the decision of referee Michael Oliver to an incident which saw Watford captain Troy Deeney sent off against Arsenal recently.

The club unsuccessfully appealed against that that decision and Gracia called for a level of continuity from officials.

“It wasn’t a foul,” he added on Holebas’ misdemeanour.

“That contact with one player like Antonio, it is a foul there a lot of fouls during the game.

“It was the same with Troy and (Lucas) Torreira – in the next games there were similar situations.

“After two games, it is true, they say it is possible it was a mistake but that is after two days. I don’t want that, I want the referees to take the right decisions.”

The win for West Ham was enough for them to leapfrog Watford in the table and secure their first top-half finish in three years.

Hammers boss Manuel Pellegrini said 10th was “not a bad position” for his side to finish but could not offer any assurances that midfielder Declan Rice would still be at the London Stadium next season.

The 20-year-old made his England debut in March and Pellegrini admits Rice could be an exciting proposition for some of the league’s biggest sides.

“It is impossible, I cannot know the future,” he replied when asked if he could let West Ham fans know Rice would remain at the club beyond the summer.

“He is a player of course who has had a brilliant season, who is 20 years old, who is an English player, under 20 so he doesn’t use a space in any squad.

“So he has a lot of qualities – age and nationality, so maybe some of the big teams or all of them will want him.

“But that is one thing and the other is that if he stays here or will go, I cannot say at this moment.”