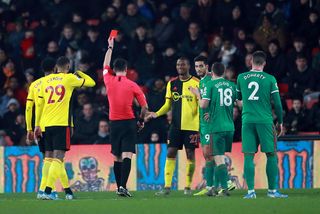 Watford’s appeal against Christian Kabasele’s red card in the Premier League win over Wolves on New Year’s Day has been unsuccessful, the PA news agency understands.

Defender Kabasele had initially been cautioned for bringing down Diogo Jota as the Portugal forward raced towards goal during the closing stages at Vicarage Road.

However, following a VAR review, the decision of referee Andy Madley was overturned and instead upgraded to a dismissal for preventing what was deemed to have been a goal-scoring opportunity.

Kabasele was incensed by the outcome – and could not have walked off more slowly.

The club opted to appeal the decision, but PA understands that was unsuccessful, so the two-game ban stands.

Kabasele will miss both Saturday’s FA Cup third-round tie against Tranmere as well as the showdown with fellow relegation-battlers Bournemouth on January 12.

Pearson, meanwhile, is surprised that Watford are embroiled in a battle for Premier League survival.

The new Hornets boss has overseen a haul of 10 points from four games during the festive period, which now offers genuine hope of escaping relegation.

Since replacing Quique Sanchez Flores in early December, Pearson has lost just one of six matches and the veteran manager’s only puzzlement is why the club have been struggling.

“Because of the types of performances the players have produced, what surprises me is why we’ve not been able to do it for more of the season,” Pearson said.

“With the players we have I’m surprised that we’re in the condition we’re in and the circumstances we’re in.

“We’ve tried to keep things pretty simple and try to create an atmosphere in the club because we have maybe lost a little bit of our identity in terms of how we play.

“When teams are at the bottom there’s always a suspicion there may be something else going on, but this is a good club with good people working for it, including the players.

“This club has character and we need to reflect that on the pitch, but there’s a lot of hard work still to be done.

“Our desire to keep the ball out of the net and put bodies on the line against Wolves was clear for everyone to see.

“That bodes well for us. It doesn’t mean that our season is saved and we must show it every week.”

Pearson may be forced to bolster his resources in defence after Kiko Femenia limped off with a hamstring injury against Wolves, but new arrivals during the January transfer window will be kept to a minimum.

“We may do something because we have a few injuries at the moment. I’m not a believer in collecting players,” Pearson said.

“If we can improve what we have then fine, but I’ve been very encouraged by the players that we have.

“We’re rediscovering some form, which will be important for us. There might be some defensive cover, who knows.

“Kiko Femenia’s hamstring injury… he’s played so, so well for us… so we’ll have to look at that. But we won’t be adding lots and lots of players.

“We’ll do what we think is right to give us a more realistic chance of retaining our Premier League status.”