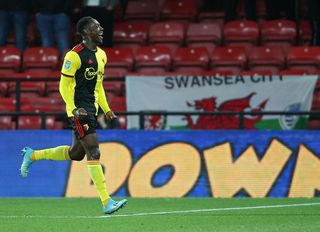 Watford boss Quique Sanchez Flores could be ready to hand Danny Welbeck a first Premier League start of the season after the striker’s return to fitness.

The former England international saw his final campaign with Arsenal ended prematurely by a broken ankle, before joining the Hornets in the summer.

The 28-year-old scored his first Watford goal in the 2-1 Carabao Cup win over Swansea on Tuesday night.

Watford have been careful with Welbeck’s progress, with former boss Javier Gracia opting to give him a couple of substitute appearances in the Premier League during August.

Welbeck now has another full 90 minutes under his belt – which followed on from playing the whole of win over Coventry in the previous round of the cup.

“Danny is involved with the squad, he will be in the list (for Wolves),” said Sanchez Flores.

“We are taking care about him, we know he hasn’t played too much in the weeks before this match, but now the most important thing is his very strong mentality.

“He wants to play, he wants to be involved, he wants to recuperate the best version (of himself). We try to use all this in a positive way.

“When Watford signed this kind of player, they were thinking about his levels two years ago. All we have to do is recuperate his physical health and take care of him.

“For us, the kind of player he is and the experience, all these things he can give us are very important.”

Victory over Swansea helped Watford start the recovery process from last weekend’s 8-0 thrashing at Manchester City, which left them stuck at the foot of the table, but only two points behind Wolves and Aston Villa.

Defender Craig Cathcart has given the squad a boost by his return to training following a thigh problem suffered while away on international duty with Northern Ireland.

Club captain Troy Deeney, meanwhile, continues to recover from surgery on his knee in August.

Sanchez Flores, who was previously in charge at Watford for the 2015-16 season, believes the forward can continue to have a positive influence on the group.

“I know Troy Deeney very well and I know what he can do for us, and the connection with him is amazing,” the Spaniard said.

“He is one of the main players in the squad. He knows this is a difficult period for Watford, so he wants to participate, but I want Troy Deeney recuperating well.

“We are not reliant on Deeney, we lost one player, we need to find solutions with other players. Right now, we are focused on the players we have, who can play.

“He tries to be close, he tries to help, to give information we need, always. These kinds of players, when you have them, transmit good vibes.”