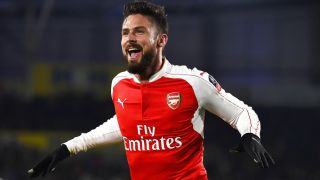 Arsenal manager Arsene Wenger affirmed his admiration for Olivier Giroud after the striker notched his 100th goal for the club in their Europa League win over BATE.

France international Giroud brought up his century with a second-half penalty to help secure an important 4-2 win in Belarus.

Largely restricted to the role of an impact substitute this season, the 30-year-old's 49th-minute strike was his first competitive goal of the campaign and saw the Gunners take control of Group H.

In becoming the 19th Arsenal player to reach the milestone, Giroud also achieved it in quicker time than both Dennis Bergkamp and Robin van Persie.

"I'm very pleased for Olivier. I'm a big admirer of him," Wenger said at his post-match news conference.

"It's a respectable and fantastic number. It's not easy because he's in good company when you look around him. He deserves it."

Wenger also reserved praise for the young prospects who came into his starting XI, which featured the likes of Ainsley Maitland-Niles, Reiss Nelson, Joe Willock and an impressive Jack Wilshere.

"Joe Willock did well, Reiss Nelson did well, they all did well," he said.

"The main reason is because they have quality, but also because they are well guided and surrounded by people at the back in Per Mertesacker and [Shkodran] Mustafi who guide them well. That’s very important at that level."

Arsenal return to Premier League action when they host Brighton and Hove Albion on Sunday.