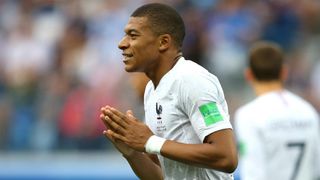 Former Brazil star Kaka hailed Kylian Mbappe for his maturity and said fans were "blessed" to see the France teenager at the World Cup.

Mbappe, 19, has impressed throughout the showpiece tournament in Russia, scoring three goals in six games to help his nation into Sunday's final against Croatia.

Kaka – who made 92 appearances for Brazil during his career – lauded the Paris Saint-Germain attacker for his performances.

"I think the best thing we can say about him is his speed, and how quickly he can run," Kaka, speaking courtesy of Adidas, told Omnisport.

"Of course he's not just running because he has very good control when he is running.

"And he is also just 19 years old, but he sometimes seems like he is 35 years old – very mature, controls the game, [makes] good choices.

"I think he's got a very, very good future and to see a 19-year old player playing and performing like he is performing at this World Cup – we are blessed to see something like that."

Mbappe will look to guide France to a second World Cup title when they face Croatia in the decider in Moscow.