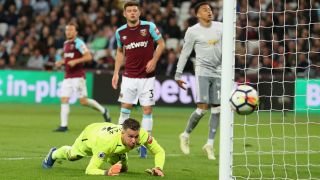 Manchester United guaranteed a second-place finish in the Premier League with a tame 0-0 draw at already-safe West Ham on Thursday.

Jose Mourinho's men, beaten 1-0 at Brighton and Hove Albion on Friday, knew a point at London Stadium would be enough to ensure they will end the season as runners-up to rivals Manchester City.

With defences on top, Adrian made a string of saves to protect West Ham's clean sheet and justify his selection in goal ahead of England international Joe Hart, who returned from illness but was only named on the bench.

United goalkeeper David de Gea, meanwhile, was untested as he ensured he will collect the Premier League's Golden Glove for the first time by recording his 18th shutout of the season.

Mourinho made eight changes from the Brighton loss, with Anthony Martial and Marcus Rashford among those dropped, but United could not find a way to beat Adrian, who brilliantly turned a Luke Shaw drive onto the post in the first half.

Back-to-back blanks indicate United - 19 points behind champions City with one round of games to play - are badly missing leading goalscorer Romelu Lukaku, who is battling to recover from a foot injury in time for next weekend's FA Cup final against his old club Chelsea.

Marko Arnautovic beat Chris Smalling for pace in the seventh minute but fired straight at De Gea, the forward then heading over after the United defender badly sliced a clearance.

United were developing cohesion and, following Adrian's parry of an Alexis Sanchez strike, Shaw thumped the rebound against the base of the post via a vital touch off the goalkeeper's boot.

But with the game played at a very low tempo and with a distinct end-of-season feel, the first half ended without a goal when Adrian denied Lingard again in stoppage time.

In the absence of the injured Lukaku, Lingard appeared to be United's most likely scorer, though he could not beat Adrian with a 20-yard strike in the 55th minute.

Paul Pogba was struggling to exert influence on the game and the midfielder should have scored from Antonio Valencia's right-wing cross, instead heading wide.

Both managers made attacking changes as former United boss David Moyes introduced Andy Carroll off the bench and Mourinho turned to Rashford in search of a winner.

But neither side could break the deadlock in a contest with little riding on the outcome, though Pogba and Hammers captain Mark Noble earned 88th-minute bookings in a fiery climax.

- Manchester United have guaranteed second place in the Premier League, their highest position since winning the competition in 2012-13.
- West Ham kept only their third home Premier League clean sheet against United in 22 matches (also August 1998 and December 2006).
- Jose Mourinho has managed more matches against David Moyes without losing (13 - W8 D5) than against any other coach in his career.
- Since Alex Ferguson retired at the end of the 2012-13 season, no Premier League team has drawn more matches 0-0 than United (19, level with Southampton).