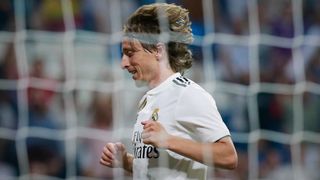 Croatia captain Modric emerged as Inter's primary transfer target following the World Cup in Russia but the Italian side have been unable to lure the 32-year-old midfielder to Milan.

Madrid sent an official complaint to FIFA, alleging Inter contacted the player illegally over a potential move, while the Serie A outfit confirmed legal action against LaLiga president Javier Tebas who criticised the club's pursuit of Modric.

Modric also described a report claiming he approached Inter about the prospect of a transfer as "the greatest nonsense in history".

Ausilio was asked about Modric prior to Inter's 2-2 draw against Torino on Sunday and he told Sky Sport Italia: "Who? Let's talk about the game.

"We're happy with the team we put together, as we tried to improve it and bring in elements we were missing, particularly in terms of experience and alternatives in attack to make us more unpredictable.

"I think the Inter squad is now complete."

| FT Inter 2-2 TorinoIt ends all square here at San Siro, with first-half goals from and not enough.August 26, 2018

Ausilio, meanwhile, insisted there is room for Portugal international midfielder Joao Mario, who has been linked with a move away after spending the second half of the 2017-18 season on loan at West Ham.

"We think there is space for Joao Mario, he is not being kicked out, nor forced to choose another club," Ausilio said. "He received offers, he is considering them and of course would like to play more regularly, but he seems content here and in line with the team’s objectives."