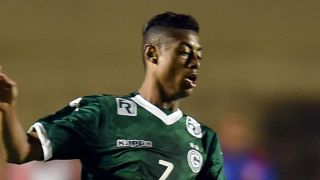 Wolfsburg have strengthened their attacking options for the second half of the Bundesliga campaign with the signing of Bruno Henrique from Goias.

The 25-year-old arrives in Germany having signed a contract until 2019 and could be available for Wolfsburg's home clash with Cologne this weekend.

His addition comes as a boost for Dieter Hecking's side after losing Bas Dost to a foot injury in January, and Wolfsburg will hope he can build on the seven goals he scored last season for Goias in the Brazilian top flight.

Bruno Henrique was delighted to have agreed a switch to Europe and has vowed to help Wolfsburg end their five-game winless run in the league.

"I am very happy to be here," he told the club's official website. "It has always been my big dream to play in Germany.

"The Bundesliga is one of the strongest leagues in the world.

"I'll give everything now so I can also help the team in a timely manner."