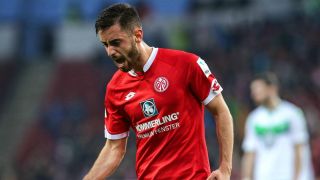 Yunus Malli has been selected as the player to fill the void left by Julian Draxler's departure from Wolfsburg, leaving Mainz to sign a four-and-a-half-year contract.

The Turkey international had regularly been linked with a move away from Opel Arena after a particularly impressive season in the Bundesliga last year, scoring 11 goals from 34 appearances as an attacking midfielder.

But the     Volkswagen Arena is his destination after a similarly effective start to the campaign which has seen him score six times and set up another six in 16 league outings.

Malli is the club's first new addition since seeing Draxler depart for Paris Saint-Germain on Tuesday in a deal reportedly worth €40 million, and the Turk - who will wear the Germany international's number 10 jersey - is rumoured to be arriving for €12.5 million.

Head coach Valerien Ismael said: "With Yunus Malli, we have gained further flexibility and strength in the attacking areas, whilst naturally adding to the competition for places in the midfield.

"He is dangerous in front of goal, which is made clear by the number of assists he provides, and he also possesses quality from dead-ball situations.

"It's also an advantage that he is very familiar with the Bundesliga and won't need much time to adjust."