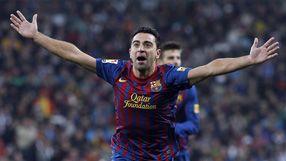 Barcelona's chances of retaining their La Liga crown rely on them beating leaders Real Madrid at the Nou Camp on Saturday, midfielder Xavi has said.

"If Barca win we will continue to have options in this league and if we lose, well, Madrid will have wrapped it up, so it is all or nothing," the Spain international told Gol television.

Barca's Chilean striker Alexis Sanchez is expected to recover from a knock to his thigh and be available, while defender Gerard Pique could return to the defence after sitting out the Champions League semi-final first leg defeat to Chelsea.

Mourinho sent out his number two Aitor Karanka to speak to the local media again on Friday, as he continued to snub the habitual pre-league match news conferences. Karanka played down the significance of the encounter.

"They are three important points because they are against a direct rival, but there are four games left after that whether we draw, win or lose," he said.

"We have all 24 members of the team available and we are delighted."

Atletico Madrid's 4-2 home win over Valencia in their Europa League semi-final first leg on Thursday made it 10 straight wins in Europe.

They have a battle to return there next season. They lie eighth in La Liga, one point outside the Europa League qualification berths, on the same number of points (45) as visiting Espanyol on Sunday, who are 10th.

"With this level of play we won't reach the Europa League final and we wouldn't deserve to," Valencia coach Unai Emery said. "We must accept the criticisms and be strong at home to achieve third place and to get through the semi-final."

Athletic Bilbao, seventh with 45 points, lost their Europa League semi-final first leg 2-1 at Portugal's Sporting on Thursday, and continue their push for a return to Europe next season at basement side Racing Santander on Sunday.

"I think the change I made [withdrawing Ander Herrera] coincided with their goals, and gave them the possibility to turn the tie round," Bilbao coach Marcelo Bielsa said after his side conceded twice in the last 15 minutes in Lisbon.

Champions League-chasing Levante, fifth with 48 points, host ninth-placed Sevilla on Saturday at an unusual kick-off time of 20:30 to avoid clashing with the 'Clasico'.

Sevilla, who suffered a 5-1 hammering at Getafe on Monday, have winger Jose Antonio Reyes back after injury.