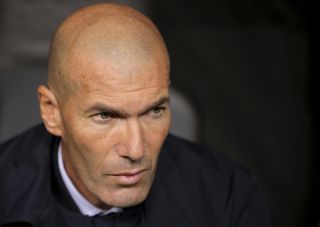 Zinedine Zidane said he was “delighted” to achieve a 1-0 win over Galatasaray after recent criticism of his Real Madrid side.

Toni Kroos scored the only goal in his 100th Champions League appearance to lift Los Blancos off the bottom of Group A.

A loss to Paris St-Germain, a draw with Club Brugge, and a LaLiga defeat to Mallorca on Saturday had put pressure on both Zidane’s side and his position, with Jose Mourinho linked to the job.

Speaking after the win in Istanbul, Zidane told the Real Madrid website: “I’m delighted for the whole team because there’s been a lot of criticism, it’s not an easy place to come to and we showed good character.

“It’s important to win when you play every three days and tonight we were focused right from the off.

“We created a lot of chances after some really good moves and I would have liked to have seen us get a second and even a third because that would have meant that the opposition would have eased off in terms of their pressing.

“At 1-0 they still believed they could level things up right until the end, but we were focused from the first minute until the last.

“We worked hard and were strong and that’s what got us the win.”

Zidane’s side were knocked off top spot in LaLiga by Barcelona after Saturday’s 1-0 defeat at Mallorca but responded with a crucial win, which could have been by a wider margin had it not been for Galatasaray goalkeeper Fernando Muslera.

Muslera made a string of outstanding saves to keep Galatasaray in the tie, while the Turkish side were not without their chances.

Andone forced Courtois into a better save, low in the bottom corner, but after efforts from Rodrygo and Karim Benzema had tested Muslera, Real took an 18th-minute lead.

Eden Hazard cut the ball back inside the area and Kroos scored off a deflected shot, which flew into the top corner and silenced the partisan home fans.

The win lifts Madrid past Brugge and Galatasaray into second place with four points, while Paris-St Germain maintained their 100% record with a 5-0 win in Belgium.