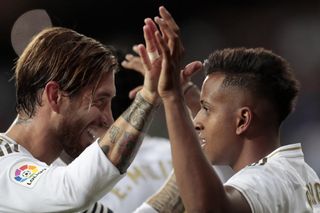 Real Madrid manager Zinedine Zidane was full of praise for Vinicius Junior and Rodrygo as the two teenagers helped the side to a 2-0 La Liga win over Osasuna.

Vinicius Junior notched his first goal of the season before the interval and fellow Brazilian Rodrygo marked his first appearance for the Spanish club with a debut goal in the second period.

The side have responded well to last week’s defeat at the hands of Paris St Germain with two consecutive wins sending them top of La Liga by a point.

With three games still to play, this is how it stands in #LaLigaSantander…— LaLiga (@LaLigaEN) September 25, 2019

Speaking after the match, Zidane said of the goalscorers: “You saw just how excited they were at scoring at the Bernabeu.

“I was most pleased with the way they controlled the ball and Rodrygo’s run leading up to the goal was amazing.

“We’re top but that doesn’t mean anything. The important thing is that we continue on in this vein.

“We need to believe in what you’re doing and keep working with the same energy.

“You’re going to have tough spells during a season but we’ve got to be happy tonight.”

Luka Jovic lashed an early rebound just over the crossbar and Toni Kroos was also off target soon after as Real settled and began to chase an early goal.

Osasuna defended effectively after an encouraging start, restricting Real to just one further attempt before Vinicius opened the scoring in the 36th minute.

The Brazilian took one touch after being teed up by Kroos and curled a shot from outside the box into the top corner via a slight deflection off Osasuna defender Raul Navas.

Vinicius tried his luck into the opposite corner moments later, but his effort just cleared the crossbar.

Jovic was wayward when he had a clear shot on goal early in the second period, but he made no mistake when set up by Lucas Vazquez again in the 58th minute, only for his maiden goal for Real to be ruled out for offside by VAR.

Another Vazquez assist saw Kroos’ shot brilliantly saved in the top corner by Osasuna goalkeeper Ruben before Rodrygo scored less than a minute after replacing Vinicius with virtually his first touch.

Rodrygo, signed from Santos for £40million in June 2018 but only with Real’s squad since July, took Casemiro’s cross-field ball in his stride and, after cutting into the area, curled a low shot inside the far post.

Jovic headed Vazquez’s cross just wide and headed another late effort off target, while Rodrygo went close to his second in the closing stages following a corner.