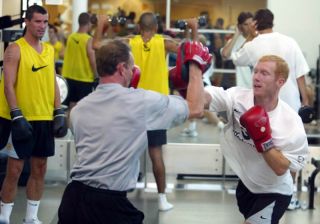 After Manchester United won the treble in 1999, Sir Alex Ferguson made one of his most important signings when he added power development coach Mick Clegg to his backroom staff. ¬†

His job was to slowly introduce plyometrics ‚Äď explosive jumping exercises ‚Äď and weight training to maximise the athletic potential of the first team squad.

Clegg helped to form a gym culture at the club‚Äôs Carrington training ground, as the Red Devils‚Äô star names added conditioning work to their daily diet of technical training.

Roy Keane, Cristiano Ronaldo, Paul Scholes, and Ryan Giggs sampled new training methodologies as they adapted to football‚Äôs physical evolution at the start of the 2000s.

FFT caught up with Clegg to find out a little bit more about United‚Äôs gym club and exactly what those four names did to gain an edge over their rivals. You might just be able to do the same... ¬†¬†

When I first met Roy he was recovering from an injury and he asked me to help him get fit. Before I did that, I told him we were going to sit down and have a cup of tea. It was important I got to know him before I started training him. He told me he‚Äôd been an amateur boxer during his youth and I explained how I‚Äôd ran a boxing club earlier in my career. We decided to do some boxing training and I soon found out he was a ferocious puncher and a great character to be around.

After just one training session with him, other players wanted to try boxing. They saw Roy doing something different and wanted to copy him. He has tremendous leadership qualities. He inspires people to do the right thing if they‚Äôre of the right mindset. That‚Äôs the part of his character people don‚Äôt always see. Roy is a really tough character who can take a lot of stick and dish it out as well. But most of all he moulds people into being the best that they can be.

Cristiano was very open-minded and he would try different types of training to see if they would improve his own game. ¬†He‚Äôs a wonderful competitor and one thing I always remember is how he used to do a boxing-style core workout after training. I‚Äôd toss a medicine ball to him and he‚Äôd catch it, do a sit-up and twist from side to side before throwing it back. He wanted to see if he could do as many as the boxers I used to train. Unsurprisingly, after a few weeks he surpassed their efforts. He was always looking for an edge.

Ryan was the only player who came close to Cristiano when it came to the gym. He was so dedicated. He would always set me little tasks to help improve parts of his game. One thing that used to frustrate him was his crossing. He could beat men for fun but he felt his crossing let him down. Eventually I designed a training drill where he had to run with a ball in the gymnasium and then try and hit a small fitball that I would throw in the air. After a while he was hitting it nine times out of 10, which wasn‚Äôt an easy thing to do. Lots of other players tried to do the same routine but none of them came close to Ryan.

The gym wasn‚Äôt the place Paul really wanted to be but he used it when it was necessary. When it came to weights and sprint times, he wouldn‚Äôt score highly. But his ability to see things on the pitch in terms of his peripheral vision ¬†- seeing the players on his team or opponents trying to take the ball off him ‚Äď was exceptional. His reaction times and his ability to move from one place to another very rapidly were unusual for a guy who wasn‚Äôt quick or strong on a weights based exercise. We would use various pieces of technology to train reaction speed and vision and he always came out on top.

Bryan Robson: How to be the ultimate captain

How to captain your team

Cross with precision, pace and accuracy