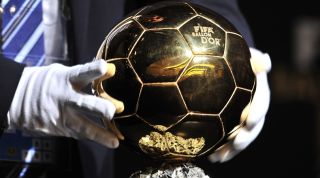 Note: This covers the last 20 years – before the mid-90s, only European players were eligible for the award. That explains Pele and Diego Maradona missing out on the original honours – but it doesn’t cover the absence of this lot…

Take whatever feelings you might have about Real Madrid’s cuddly captain out of the equation and you’re left with a player who’s simply a medal magnet. At age 32, he’s had a hand (plus the odd knee) in winning every major honour for club and country, while racking up 161 caps and counting for Spain.

The argument is that defenders don’t often win this type of award. What makes Ramos unique is not only his eye-catching technical ability, but his nose for game-changing goals. In his first two Champions League finals he scored vital goals to help Real lift the trophy – yet he’s never even had a top-three Ballon d’Or finish. He must have annoyed some people along the way or something.

Football’s most decorated player, possibly ever. Certainly in Manchester United’s history, anyway. More than that, the old blood-twister was exactly the style of footballer who does well with these sort of gongs: a jinking left-winger with an eye for goal and/or humiliating an opposition full-back.

Yet it’s perhaps easy to understand why Giggs has never had a Ballon d’Or look-in. His longevity, from teenage tyro to yoga-stretched veteran, is what’s remarkable about the Welshman, rather than one stand-out season. Still, a token third place doesn’t seem out of the realms of possibility. In 1999’s Treble-winning season, say, or his second Champions League-winning season of 2007/08, or any of the 13 damn times he won the Premier League.

Not a universally popular player, we’re given to understand. But few would deny his talent. Even playing third fiddle to Luis Suarez and Lionel Messi at Barcelona, he looked a world-beater at times. In particular, as he showcased his will and skill to lead Barça to that astonishing 6-1 win over PSG in 2017.

Neymar also has 60 goals for Brazil – two behind Ronaldo, 17 behind all-time leader Pele – and he’s 26 years old. If he stays fit, he’ll gazump both. And if he can just spend more time thrilling us with his rainbow flicks rather than enraging us with his turf rolling, Neymar may well go on to claim the award that reportedly fuelled his move to Paris in the first place.

Defenders don’t win this award often, but Lahm is a special case. For a while, the 5ft 7in ‘Magic Dwarf’ might have been the best right-back, the best left-back and the best central midfielder that both Germany and Bayern Munich possessed.

Boasting stamina, technique and an astute football brain, Lahm was more than just a versatile footballer. He was, in retrospect, the stand-out player of a German generation that he captained to World Cup glory in 2014. That came just a year after he’d skippered Bayern to a Treble. If Italy’s Fabio Cannavaro can win the Ballon d’Or for his performances in 2006, the least Lahm deserved was a podium spot eight years later.

Not the greatest player ever – although we won’t say that within the big man’s earshot – but arguably the greatest ever scorer of spectacular goals. Certainly, nobody scores goals quite like Zlatan; his vision and invention paired with the unique, kung-fu dexterity of his 6ft 5in frame.

Few have proven themselves greater travellers either: Sweden’s record goalscorer has won major honours in the Netherlands, Italy, Spain, France and England. The knock against him is his Champions League CV, which features 48 goals, but never an appearance in the final. Odd, as his record over in major club games shows he’s no flat-track bully, yet it explains the Ballon d’Or absence despite his jaw-dropping talent.

With respect to Michael Owen, a Ballon d’Or winner after an excellent 2001, his victory has become a byword for the curious anomalies that awards can throw up. As in; Owen won this prize, Thierry Henry never did – yet anybody who watched the Premier League during the late ’90s and early noughties can tell you who the superior striker was.

Boasting searing pace, skill and an eye for goal, a peak Henry made the impossible commonplace. Ending his career as France and Arsenal’s all-time top scorer, Henry also won everything from a World Cup to a Premier League/FA Cup double, to a Treble with Barcelona.

Perhaps a lack of match-clinching final goals to really rubber-stamp a triumphant year held Henry back. The highest he ever finished was second to Pavel Nedved in 2003.

A casualty of Messi and Ronaldo’s dominance as, outside of that duo, Robben might just be the best game-changing individual talent of his era. Unbelievably quick despite numerous injuries, the now-34-year-old Dutchman has slalomed past opposition defences at will for PSV, Chelsea, Real Madrid and Bayern Munich.

The knock on Robben at one point, after lost Champions League and World Cup finals, was that he couldn’t quite land the big one. Then he scored the goal that won Bayern the Champions League in 2013 and was – in many eyes – the best individual performer of the World Cup a year later.

In that 2013 Treble year, Bayern threw their political weight behind Franck Ribery for the Ballon d’Or. He finished third, but Robben is the superior player – despite never finishing above fourth in the Ballon standings.

In an era of brilliant false nines and between-the-lines attackers, Suarez is the best pure striker of his generation. No biting pun intended, but it’s his hunger as much as his flair or finishing ability that gives the Uruguayan his edge.

This relentless menace almost dragged Liverpool to a league title in 2013/14, then left for Barcelona and did what no other forward had done before. Namely, Suarez earned the respect of Messi, who’d previously burned through strike partners. After all, it was reportedly Messi himself who suggested switching Barça’s play so that his Uruguayan team-mate was the spearhead while he himself dropped deeper.

Goals and trophies have flowed for Suarez at Barcelona, but being in the same team as Messi has inevitably stifled his chances when it comes to individual awards.

Lev Yashin in 1963 is the only goalkeeper to win the Ballon d’Or, and if Buffon can’t join him, it’s tempting to wonder which keeper ever will. Longevity, consistency, brilliance; Italy’s 6ft 4in ‘Superman’ ticks every box for greatness and boasts more records than an avid vinyl collector.

The Champions League infamously remains missing from his CV and you get the feeling that, should he win it, the fortysomething Buffon may just be given this gong as a lifetime achievement award. As it is, the closest he's come was in 2006 when he conceded only two goals in seven games as Italy won the World Cup – but was pipped into second place in the Ballon d’Or standings by team-mate Cannavaro.

The heartbeat of one of the greatest club sides in history and one of the greatest national sides of all time. Yet in the Ballon d’Or standings, Xavi had to settle for a hat-trick of third places from 2009 to 2011; hardly appropriate for a player who’s made a career habit out of finishing first.

The genius of Messi and Ronaldo accounts for Xavi missing top spot, but it's slightly galling that the unassuming brilliance of Barcelona’s pass master wasn’t given the highest individual recognition. After all, tiki-taka will go down as the dominant style of play of the early 2000s – and yet it’s its greatest practitioner who has never won Europe’s top individual prize.

Let’s all pack up and go home, shall we? If Maldini, a man who played left-back as well as any player has ever played a position, can’t win this award, full-backs have no chance.

Unlike others on this list, Maldini wasn’t overshadowed by a modern duopoly and didn't have his Champions League record count against him (how could it? He won five of them). So it’s a mystery as to why the stylish Milan defender – who perfected the art of slide tackling with either foot, without knocking a hair out of place – never won this award.

We’d have given it to Maldini back in 1994 when he was probably the best player at the World Cup and imperious as Italy held Brazil to 0-0 for two hours in the final. Yet Maldini placed third that year. Note: much of this (except the hair bit) applies to his central defensive team-mate Franco Baresi, another Ballon d’Or absentee but one who just misses our 20-year cut-off.

LIST The 16 best players never to win a league title

ANALYSIS The changing face of the Championship: how England’s second tier shifted its style

You can understand why Maldini, Buffon or even Iniesta’s long-term team-mate Xaxi have missed out. Full-backs, goalkeepers and midfield schemers don’t scoop awards quite like more individual talents.

Yet Iniesta was both metronome and magician depending on what you needed. He was a generous, versatile team player who could also produce moments of astonishing skill.

For club: that sublime late strike against Chelsea in 2009, the most important goal of Barcelona’s 2009 Treble-winning season. For country: the only goal in a World Cup final should probably do it, Iniesta pulling off his Spain shirt in extra time, not to reveal his abs or point to his own name, but to share a poignant tribute to his friend Dani Jarque.

Iniesta finished second in the Ballon d’Or standings that year and, while it’ll hardly be missed in a sock drawer full of medals of every type, he really should have a big golden football to shove in there somewhere too.